The KMEA 12A Honor Band is a nominated honor band for students from 1A and 2A schools. This group is not an “All-State” ensemble as it is not an auditioned group. To be eligible, students from 1A-2A high schools must complete an audition for their KMEA district band or jazz band. Directors will submit nominations to KMEA, and the final roster will be selected from that list. Students will have an opportunity to be in a state-level festival ensemble with an outstanding clinician. The 12A Honor Band will rehearse and perform as part of the In-Service Workshop.

General Info
Seating in the 12A Honor Band will be a merit-based process determined through nominations. There is no audition. There will be no nomination fee.
The 12A Honor Band is NOT an All-State Band. The tentative size of the group is 75-80 students.

The nominating school must meet the following eligibility rules for the KMEA 12A Honor Band: 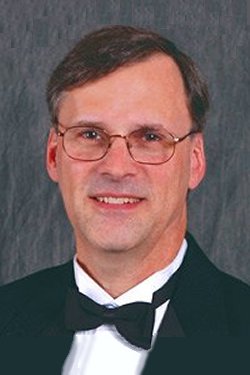 Michael Sweeney
2023 KMEA 12A Honor Band Conductor
Michael Sweeney is currently Director of Band Publications for Hal Leonard LLC in Milwaukee, Wisconsin, one of the largest publishers of printed music in the world. Michael is directly responsible for the development, production, recording and marketing of new publications for school bands. In addition, he contributes as a composer and arranger in all instrumental areas, and is particularly known for his writing at the younger levels for concert band and jazz. Since joining the company in 1982, Hal Leonard has published over 500 of his compositions and arrangements.

Mr. Sweeney is a 1977 graduate of Indiana University (Bloomington), where he earned a bachelor’s degree in music education and studied composition with Bernard Heiden, John Eaton and Donald Erb. Prior to working for Hal Leonard he was a band director in Ohio and Indiana, working with successful concert, jazz and marching programs at all levels from elementary to high school.

A winner of multiple ASCAP awards, Michael’s Ancient Voices (1994) and Imperium (1992) are featured in the acclaimed Teaching Music Through Performance series by GIA Publications. Other works such as Black Forest Overture (1996), The Forge of Vulcan (1997) and Distant Thunder of the Sacred Forest (2003) have become staples in the repertoire for middle school bands. He has received commissions ranging from middle school and high school bands to the Eastman Wind Ensemble and the Canadian Brass. His works appear on numerous state contest lists, and his music is regularly performed throughout the world. He is also in demand as a clinician and conductor for honor bands and festivals.